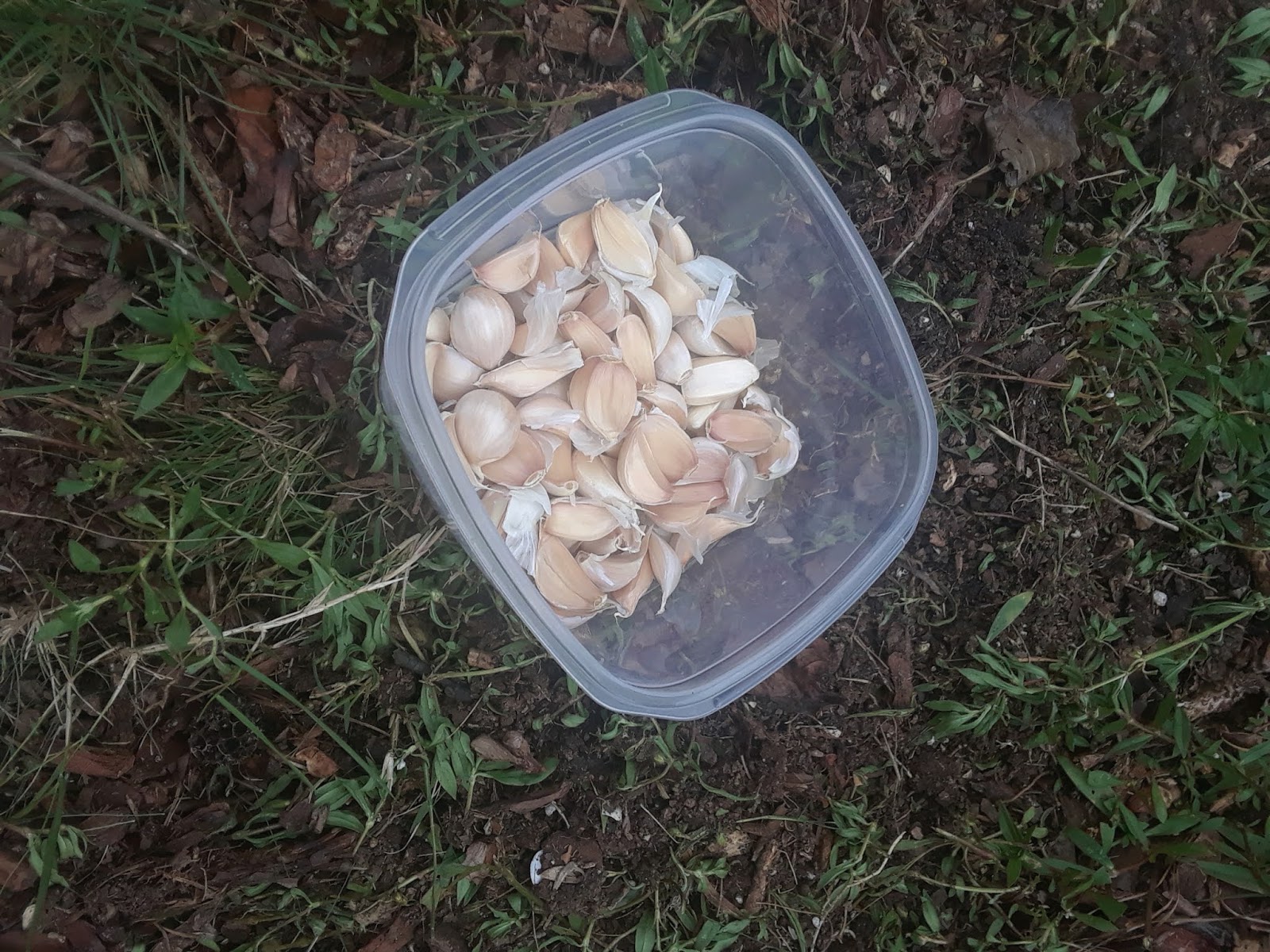 It's fall, y'all and that means: time to plant some garlic!! Garlic is such a staple in my garden. I've been gardening for a little over 13 years now and for nine years straight, I always found space to plant a few cloves, every year, and every year more and more cloves were planted. Before my family and I moved into the house we're in now, I think the most garlic I've ever planted and harvested was sixty.
Last gardening season marked the end of a streak of these hands meticulously breaking down garlic bulbs searching for the biggest cloves from each bulb to plant. Yup, there wouldn't be a 10th Anniversary planting to celebrate simply because I couldn't find anywhere to plant them in time, and when I finally decided to plant a few, I felt it was too late-weather wise.
I really missed having garlic in the garden and won't be missing out this year. 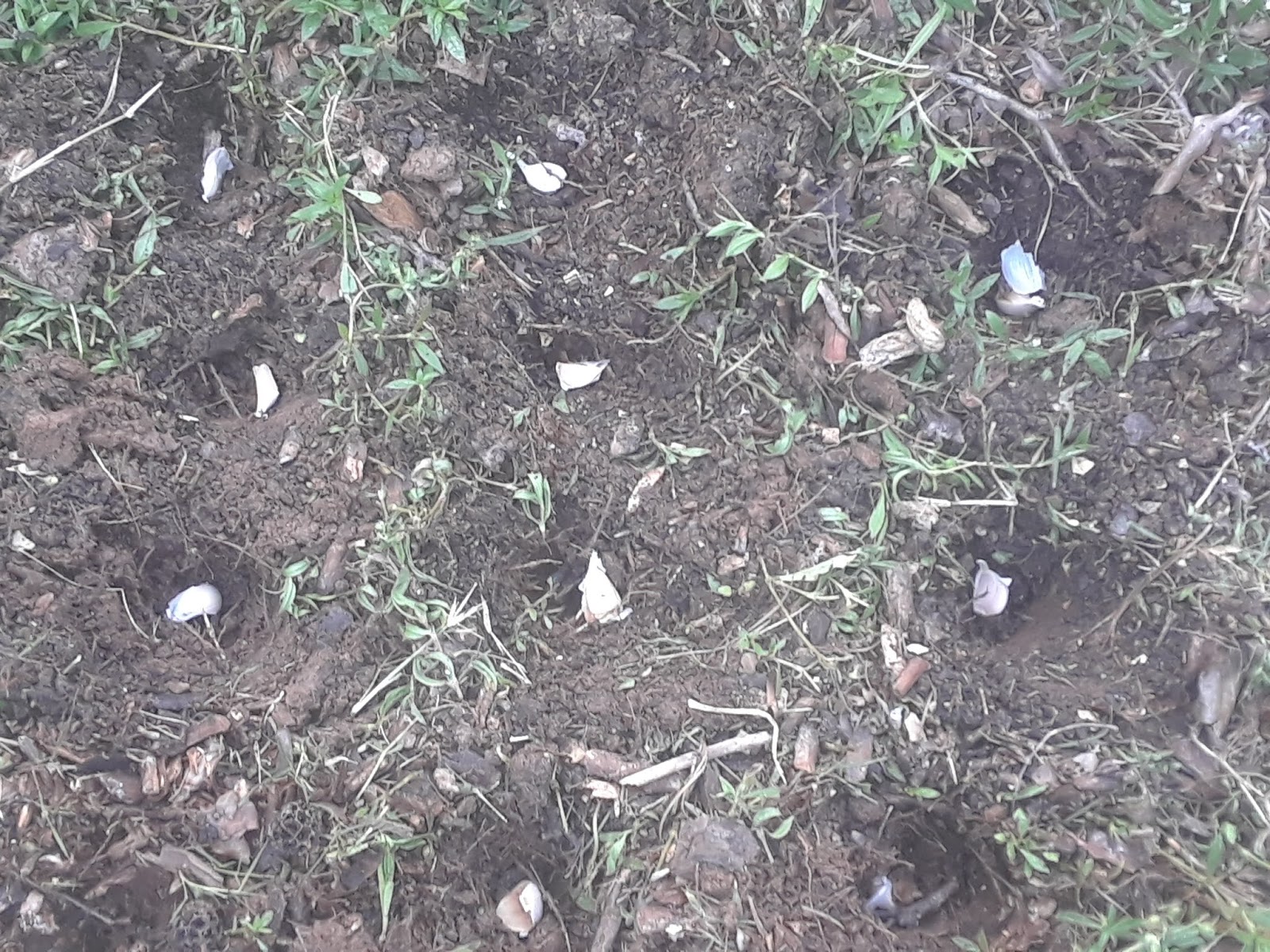 After harvesting the corn and some of the sunflowers, this area become the perfect spot to start planting.
The plan is to slowly clear off more space as the rest of the sunflowers are pulled up, so
garlic goes in. 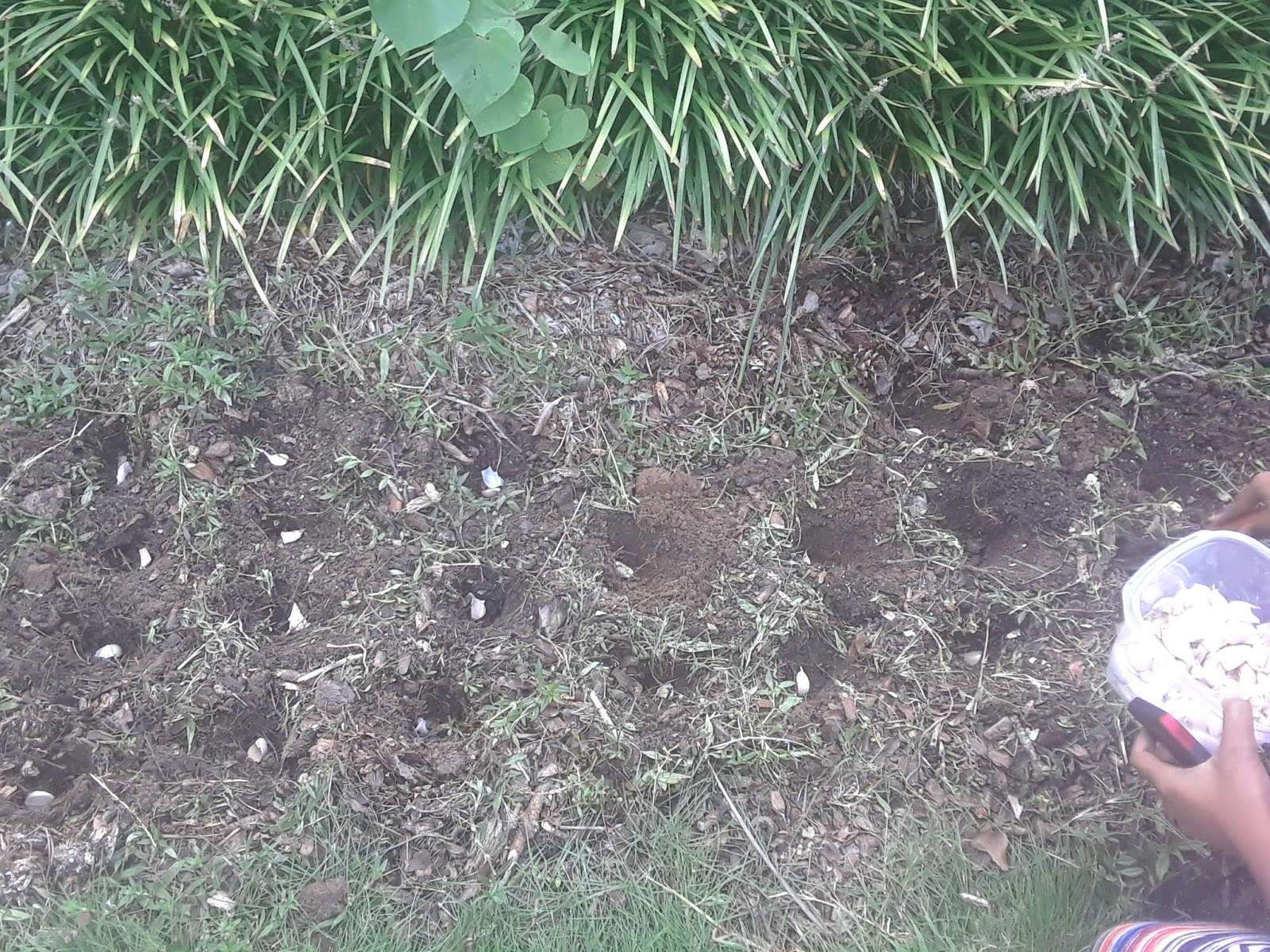 Right now, thirty cloves have been planted and who knows how many more to come.....hopefully 100!!
😊😊😊😊😊😊
We'll see.
#backyardgardener, #garlic, #organicgardening, #growfood
Posted by Atlmom5 at 7:16 AM No comments:

From Pain to Love

Been a bit sidelined these past 3 weeks with a large boil on the top of my foot, so many of the gardening and household duties haven't been my top priority. Not being able to do many of my daily tasks was been a bit annoying at first, but self-care is more important than making sure all the laundry is done on laundry day, every wall is wiped down on Fridays, and making sure weeds and dying plants are pulled. Even though these tasks are important, nothing wasn't as important as staying off of my foot as much as possible.
Before I continue, I would like to thank my children and my husband for all the help and support they gave. Love you, guys!
Now back to the post.......
This boil has been so painful and itchy. Even though my toes felt numb, and at times the boil felt like it was hitting a nerve in my foot, nothing and I mean nothing drove me crazy like the itchiness. The itchiness felt like my foot was on fire and was traveling up toward my lower leg. Apparently, as the boil was forming a head it became larger and the itchiness intensified which also became the start of the healing process.
As the boil grew, I started soaking my foot in warm water with Epsom Salt and tea tree oil. These foot soaks which eventually became feet soaking times happened three times a day while I took my daily French lessons from the Duolingo app(haven't missed a lesson yet, 235 days strong), or watching gardening videos and making plans for next season. This little time for self-care started off as just trying to ease pain for myself and I thought that I would leave it as that, but I'm happy to say, I'll be adding foot soaking twice a week to my life as a little love letter to moi.
Do you have a simple self-care routine that's a must for you?
#selfcare #agardenerheals #agreenhaven, #footcare #boil
Posted by Atlmom5 at 8:32 AM No comments: