Yesterday, Nan Schiller over at Foodal, wrote an article about oil substitutions that can replace oil  in baked goods.

There were the obvious stand ins like: butter, applesauce, and sour cream, but the list also included some very out of the box ideas, and trust me, after reading the article I understand why certain unusual substitutes  work.

The article really got my creative juices flowing and I'm ready to experiment.

Please checkout the article here. Hope it inspires you, as well.

Email ThisBlogThis!Share to TwitterShare to FacebookShare to Pinterest
Labels: #Autumn, quote of the week 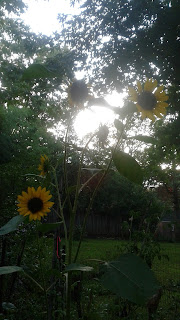 Found this picture of some of my sunflowers. Sorry for the glaring sunlight in the image, but I really like this photo because this growing season has been and still is, pretty brutal. and these little beauties really struggled this year.
The drought and extreme conditions that the Atlanta area experienced this year was truly brutal for gardeners and farmers. That was the beginning of the growing season and then in the middle of summer, the rain gods showered us with an abundance of rain.
After quenching my plants and vegetables thirst, my sunflowers and other veggies started to grow and some things died off.....yeah, I'm talking about you....pumpkins and that powdery mildew you caught, but that's another story for another day.
The remaining sunflowers eventually got a bit stronger as the dull leaves started to fall of and the flowers began to transform into a heavenly sight of bright yellow flowers and lush green leaves, granted it was a lot later in the season, but I'm thankful for the few that made it. They brought a  little sunshine to the garden.

Email ThisBlogThis!Share to TwitterShare to FacebookShare to Pinterest
Labels: #sunflowers, the survivors

Video of the Week

"Learn to be an observer in all seasons. Every single day, your garden has something new and wonderful to show you."