Over the weekend and in between loads of laundry and binge movie watching,I decided to plant some spinach seeds. My problem was I didn't know if I wanted to grow all eleven plants in the kitchen or in the basement,so I decided to plant some in the kitchen and some in the basement. I want to see which will do better, the kitchen seeds or the basement seeds? I also added another factor to the equation of which one will sprout first,two cups with spinach seeds in the kitchen windowsill have plastic covering the cups and I've done the same with a few seeds in the basement. I'm really excited to see the outcome of my experiment,I can't wait to see if all my plants succeed or if some fail, I'm just excited about learning something new. Happy Gardening! 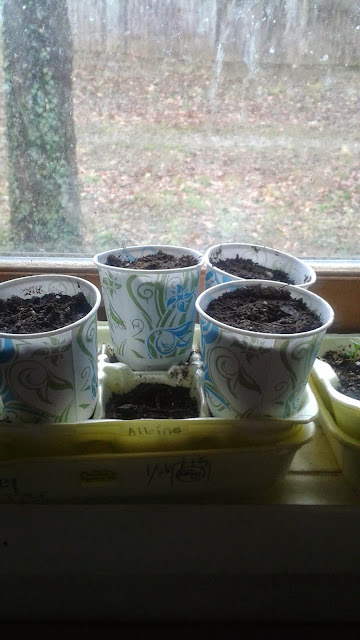 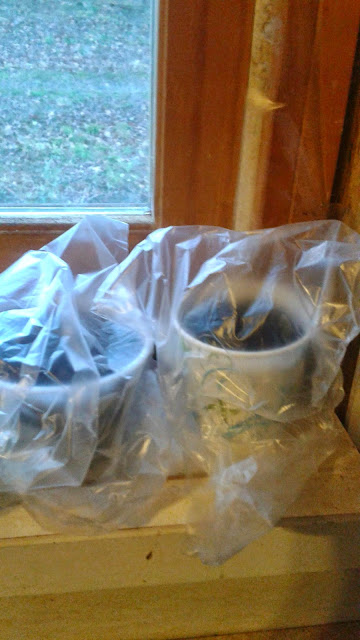 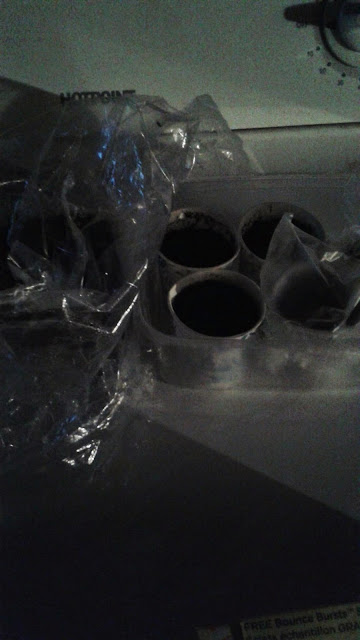 In between binge watching movies (I'm trying to watch some of the movies nominated for Oscars),doing laundry(The Never Ending Story),and checking emails....I've found a little time to find containers/cups,punch holes in the bottom of the containers,fill containers with seed starting mix and spinach seeds. Check my pictures out below. After I cover the other seeds and water,I'll have to figure out where to place everything. There's still room in my kitchen,but my issue is...should I start the spinach in the kitchen or should I start them in the basement? I've personally started spinach in the basement before and it did much better in the basement than the kitchen;however, with all this cold weather the Atlanta area is experiencing as of late,I don't know if it's safe to put the seedlings in the basement. I'll let you know what've decided in my next post. I've got to get back to binge watching these movies. Until next time...Happy Gardening! 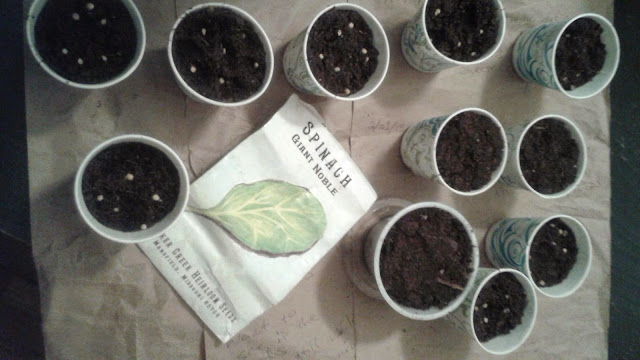 Sorry for the late update and sorry that it isn't very detailed. I'm writing this post on my phone and I really don't know how to display the photos and write what everything is. So, basically you're looking at early broccoli seedlings in the first egg carton from three weeks after planting,and the next picture with the egg carton with plastic wrap is eggplant and jalapeño seedlings. The plastic covering really helped these sprouts a long. The third photo is a picture of the broccoli seedlings once again....they have really grown....not bad when the only source of light is on a window sill. Lastly, but not least,are two plastic cups growing lettuce.... I actually have four cups growing lettuce, but I could only get two cups in the picture. I'm growing Red Romaine lettuce, the broccoli is Di Cicco,the eggplant is Aswad and the jalapeños are called Tam. Oh yeah before I forget....the Violet De Galmi onions never did sprout...I should've taken before and after pics(Lol). Well that's a little bit of the gardening happenings in my house,until next time...happy gardening!  😄😄😄😄 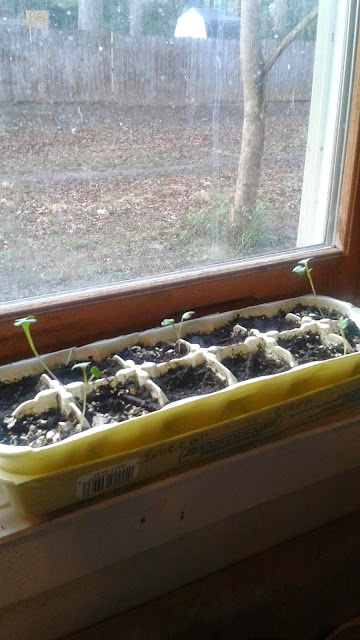 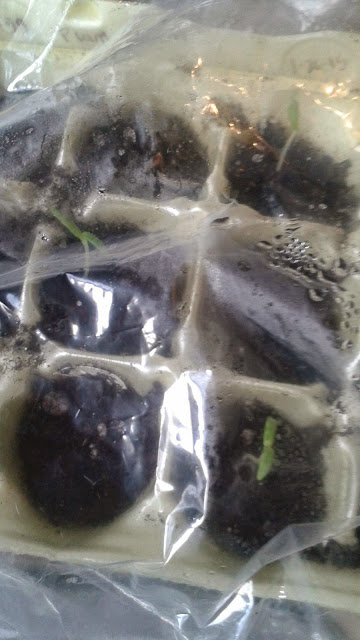 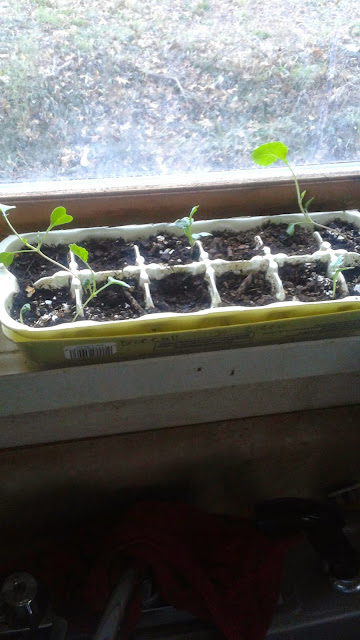 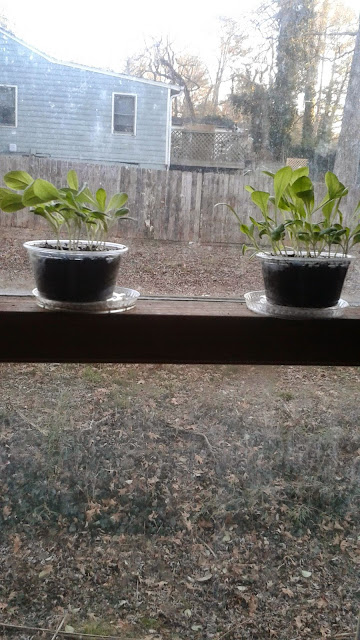 Questions and Concerns: Measles and the Many Debates

I'm still here...and I'm still starting seeds for my garden, but I just wanted to drop in to write something. I haven't been not writing because I don't have anything to say, in fact, I've been so interested in the debates about the MMR vaccine and to vaccinate or not. Has anyone else been caught in this heated debate in the country right now? Personally I don't believe our country will have some severe measles outbreak and I hate that the pro-vaccine crowd is blaming parents that decided to wait to vaccinate or not vaccinate at all. I believe the media and medical establishment is hyping this all up to scare the American public. There isn't an epidemic in this country, yes, there are people who are getting the measles(these people are not vaccinated and the fully vaccinated). Many of the cases of measles aren't in young children(last time I checked,at CA Dept of Public Health),but in adults and I haven't heard anything about deaths or anything severe that these patients are suffering from. Maybe it isn't my right to know all of that information, but I just find it interesting that the media and health establishment announces something and everyone is just scared to death.....why....why would so many people be so scared of a small outbreak like this nationally, if the majority of the population is vaccinated? I can understand people in that particular community having concerns, but to have debates about arresting parents because they decide against a certain vaccine or no vaccines at all.....is truly scary.

I've found myself on a few websites and blogs debating about jailing parents who don't vaccinate and I'm so shocked to find so many Americans agree with this line of thinking. People kept saying that science has proven that the vaccines are safe and that the parents that question the science are selfish, quacks, and unintelligent. So, as parents we should never question anything and just line up and get our shots because some expert said so.....NOT!

All of my children are vaccinated,my first two children were vaccinated on schedule( I didn't  question,except the Chicken pox),however, my third child did have a mild allergic reaction and that is when I decided to do more research about vaccines. I learned a lot about vaccines and a lot about parents who had injured or dead children from vaccines. I learned a lot about building a healthy immune system and not to just blindly accept a shot. I learned that as a parent we have a right to ask for medical inserts, so we can know exactly what is in a vaccine before my child is given something. If we as a people have the right to know what ingredients are in the food we eat,shouldn't we have the right to know what is being injected into our bodies. I mean what would the medical establishment be afraid of, if every parent could truly make an educated decision about their child's health?

People need to really learn about building their immune system and learn to question what the establishment is telling you sometimes. The only reason why all of my children were vaccinated was, so that they could attend school. I felt like their immune systems were strong enough now, I read somewhere that it takes three years for a child to have a strong immune system, so can you imagine injecting babies with all these drugs and chemicals during such a critical time of development.....I can't!

Pro-vaccine people will have you believe that all doctors and scientist believe in vaccines,it's simply not true and we as a people need to demand answers about the health of our society as a whole. Why do we have so many auto-immune diseases in this country now(is it the vaccine)?Why are two virologists that worked with Merck claim the company falsified test results of the mumps vaccine to achieve a desired outcome? Is the CDC hiding any information about Dr. Paul Thorsen and his study about autism and vaccine links?

Vaccination should be a parents right and as parents we should be given an opportunity to make an educated informed decision and right now---we are not being educated as parents about what's in these shots and how they could cause so many other issues and many of our doctors aren't educated on this issue either.

I really didn't want to discuss this on the blog, but I felt I had to because I don't like the talk that's going around in this country about jailing or fining parents who don't comply to a vaccine. Wake up, we're creating a medical police state....I mean what if I comply to all the vaccines, but not to the Chicken Pox vaccine, should I go to jail for that decision or should I go to jail because I spaced the vaccines out, or do I go to jail only if I decide not to get the MMR? Should I go to jail because I decided to opt out because I already have a vaccine injured child and I don't want to take a chance with my other children? I mean where does it end and what else would I be required to inject into my body or family to be a good citizen?